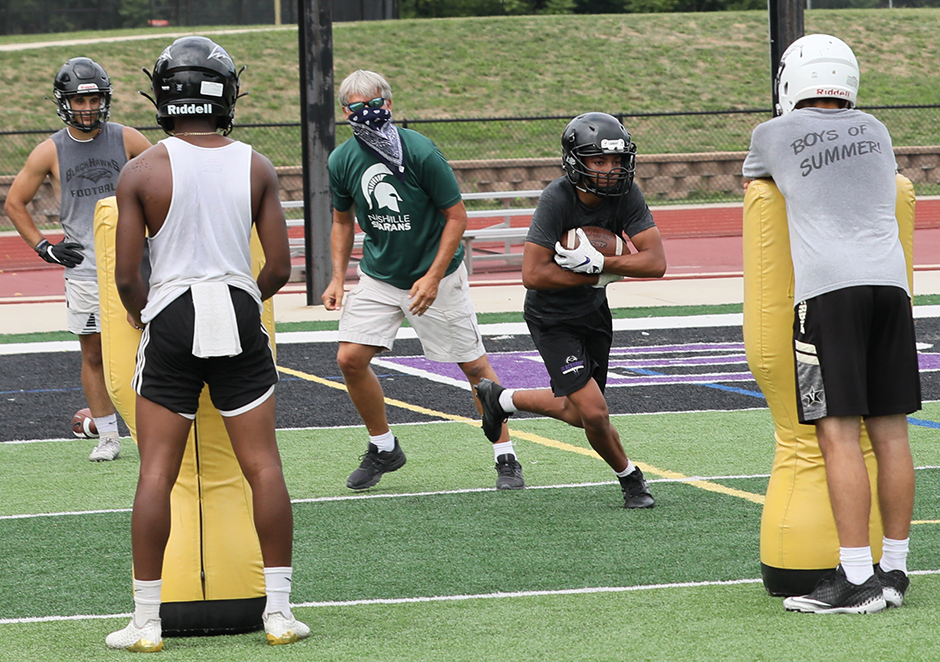 Bloomfield Hills football players practice before the MHSAA postponed the season to spring. The decision was reversed on Thursday, allowing for practice to resume and games to begin in two weeks. 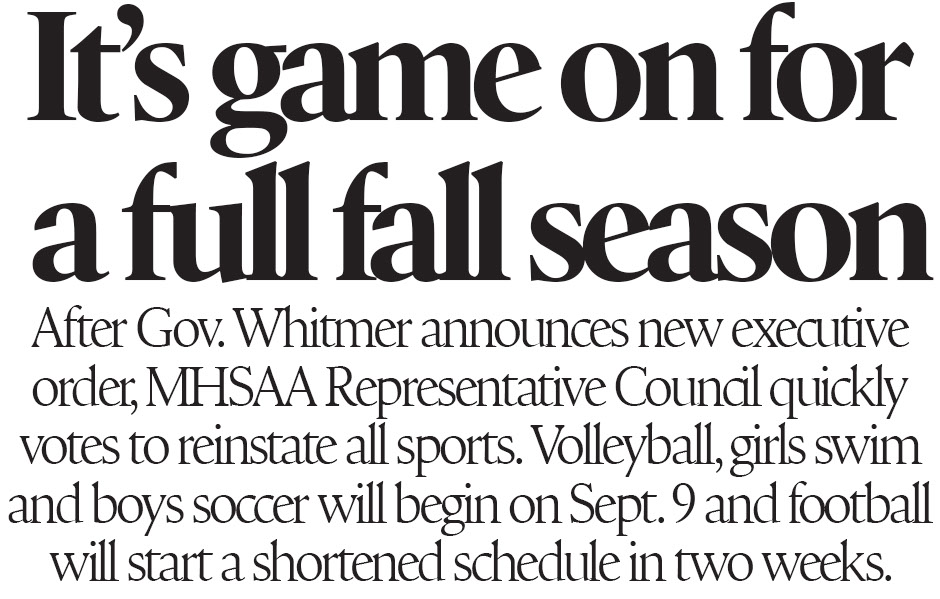 Rumor was that the governor was to announce her decision on high school sports in the state at her press conference on Wednesday, Sept. 2. No such announcement was made. Thirty-four minutes into the briefing she said only, “I will have more to say on this topic very soon.”

That came much sooner than later.

Whitmer issued Executive Order 176 on Thursday, Sept. 3, afternoon to lift restrictions from previous executive orders that paved the way to a return to a complete high school sports schedule in the state.

Shortly after Whitmer’s announcement on Thursday, the Michigan High School Athletic Association’s Representative Council voted to allow all fall sports to return to the playing field.

The MHSAA’s Representative Council initially approved a plan in July to phase in competition for fall sports in hopes of continuing to deter the spread of the pandemic.

The plan remained reliant on progression by regions across the state according to Gov. Whitmer’s MI Safe Start Plan. Currently, Regions 6 and 8 — which include the Upper Peninsula and 17 counties in northern Michigan -- are the only regions in Phase 5.

The rest of the regions in the Lower Peninsula are currently in Phase 4, which formerly allowed outdoor sports but didn’t allow indoor training, practice or competition. This meant that the fall indoor sports of girls swimming and diving, volleyball and boys water polo (a non-MHSAA sanctioned sport) were not able to be played this fall until the region was in Phase 5. No sports were to be allowed to be played if a region moved back to Phase 3, as all schools would be forced to online-only classes.

Gov. Whitmer expanded her guidance when she issued Executive Order 160 on July 31. The order included more stringent guidelines for both indoor and outdoor gatherings, including increased social distancing rules

This order, as well as the decision by the Big 10 to postpone their fall athletic seasons, helped force the MHSAA to announce on Aug. 14 that it was postponing the “high-risk sport” of football season to spring.

While Thursday’s new executive order granted the MHSAA permission to resume sports activities, the Michigan Department of Health and Human Services also issued a warning against student-athletes playing contact sports, such as soccer and football.

“Individuals can now choose whether or not to play organized sports, and if they do choose to play, this order requires strict safety measures to reduce risk,” MDHHS Chief Deputy for Health Dr. Joneigh Khaldun said.

The MDHHS said counties have faced outbreaks of COVID-19 associated with sports teams. “We know of 30 reported outbreaks involving athletic teams and facilities in August,” said Khaldun. “Based on current data, contact sports create a high risk of COVID-19 transmission and MDHHS strongly recommends against participating in them at this time. We are not out of the woods yet. COVID-19 is still a very real threat to our families.”

One little-reported requirement from the state is that all players must wear masks during competition, with the exception of girls swimming.

The new executive order also set spectator limits of two per participant for outdoor and indoor events in Phase 4.

“We are thankful for the opportunity for kids to get back on the field in all fall sports, and we appreciate Gov. Whitmer providing that opportunity with Executive Order 176 ,” MHSAA Executive Director Mark Uyl said. “We share the governor’s priorities of putting health and safety first, and the COVID-19 guidance and protocols designed by the MHSAA at her request have led to the safe starts in all sports across the state.

“Thirty-three other states are currently participating in all fall sports, and the MHSAA and its member schools are committed to doing this as safely as possible.  We are ready to again provide those experiences to students and communities that have hoped for a return of some normalcy. Given the challenges of online education in many school districts across the state, providing sports and a daily routine may be more important than ever in motivating students and providing a safe outlet for physical activity, competition and socialization.”

“I will not apologize for pushing, advocating, and questioning previous decisions about how the status of fall sports was handled. It was always about the players and families but I will say thank you to Gov. Whitmer and the MHSAA for listening and making the right decision in the end,” Vitti, who runs the state's largest school district, said in a tweet after Whitmer’s order was announced.

Football teams previously had been allowed to practice in helmets only during the traditional first week of practice, which began Aug. 10, and then during council-approved offseason “contact” days beginning Aug. 24. With the reinstatement of this fall’s season, football teams must cease all activity until Tuesday, Sept. 8, then practice two days in helmets and shoulder pads before adding full pads on Sept. 10, according to the MHSAA.

Teams may then begin their regular-season schedule on Sept. 18 and will play six games beginning with their originally planned Week 4 contests.  All football teams in 11- and eight-player football will qualify for the playoffs during this fall’s shortened season, and then advance through their usual postseason progression with eight-player championships on the weekend of Nov. 27-28 and the 11-player championships  the weekend of Dec. 4-5.

One of the reasons for allowing each team into the playoffs is the reality of some players testing positive for COVID-19 during the season.

“If a school does have a positive test and they have to quarantine and have to miss a week a game,” Uyl said, “none of that is going to be dependent on you getting into the tournament or not.”

As of now, the MHSAA has no idea whether the 11-player format will be a five- or six-week playoff. In the past, the playoffs lasted five rounds, but the MHSAA is doubling the size of the playoffs, hence the possible need for an extra week.

“We want to do this without impacting winter sports,” Uyl said. “So there could even be a scenario where maybe instead of eight divisions we go to 10 if that would allow you to continue to keep the playoffs to five weeks.”

The MHSAA is aware the coronavirus is still out there and school districts will have to deal with athletes who test positive.

“The virus isn’t going away tomorrow,” Uyl said. “What all of us have to realize is that this is part of the new normal. We have to be able to take positive cases and handle them appropriately and still figure out a way that we can continue to educate kids and continue to allow kids to play and do all those things.”

When athletes do test positive, those cases will be dealt with at the local level.

“Whenever a school has a positive case, the school works with their local health department,” he said. “From what we understand there are some consistent guidelines and contact trace with that and then they determine who has to quarantine and the length of that.”

Gov. Whitmer urged caution as teams return to the field.

“As we begin to start organized sports back up again, I urge school districts and athletic associations to do everything in their power to protect players, coaches, and staff. That means carefully following the guidelines released today,” Gov. Whitmer said in a statement. “Going forward, we will continue to work with health experts to assess the risk associated with business sectors that remain closed. For the health and safety of our families and frontline workers, it is crucial that we proceed thoughtfully and incrementally so we can measure the effects of today's actions before we take additional steps towards re-engagement."

The fall 2020 tournaments for all other sports will be conducted as previously scheduled.

While not a MHSAA-sanctioned sport, field hockey has been postponed as well. The Michigan High School Field Hockey Association is anticipated to begin its season next week as well.

It is also expected that sideline cheerleading will be allowed this fall. Marching band, dance teams, and pom-pon teams are not currently included in the return to fall participation.

> Midland Daily News: They're back!: MHSAA allows the start of all fall sports

> MLive: With all fall sports back on in Michigan, coaches and ADs are ready to roll

> MLive: Gyms, sports get green light, but Michigan’s top doc says you should still avoid both 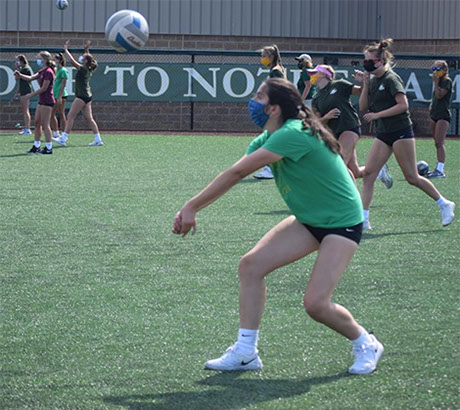 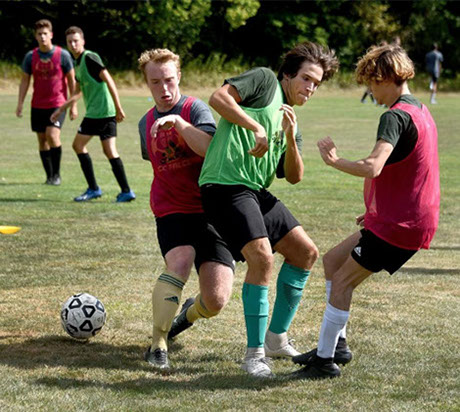 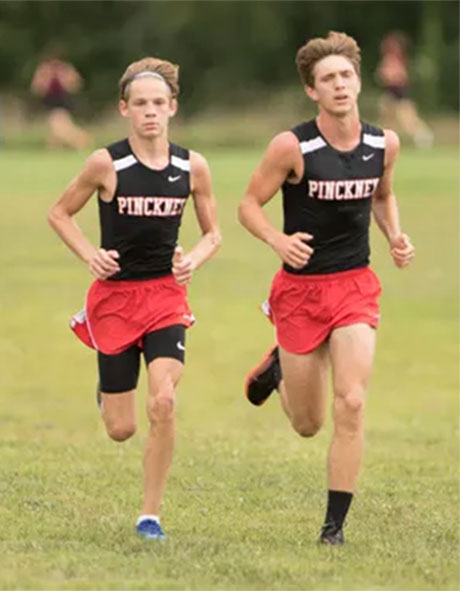 Pinckney's Caleb Jarema and Gavin White race to the finish in a cross country meet against Dexter.